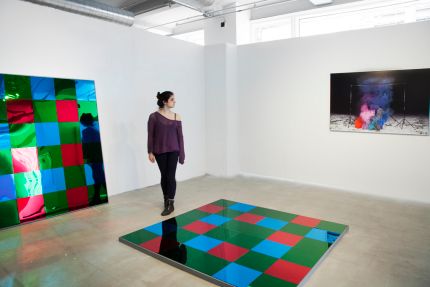 My works explore relationships between history and ideas of production of reality as related to images and mass media through photography, video, installation and sculpture.

I look to mass media as a starting point because it provides an outline of the socio-political landscape. I take the source, which is often a specific political and historical event. I then strip it from its context, leaving only the relationships between people, in individuality and as a group, and the event. I then manipulate and translate this information; with it I compile, reinterpret, and categorize the elements within the original image. Even though the final product is often heavily manipulated, staged, and stripped of contextual information, the generated images are still capable of portraying the political and historical context. I am thus exploring how the individual or group that produces mass media is imprinting some contextual memory on the images associated with these political and historical events. Specifically, each of these individuals or groups is a function of the political and historical context within which they live. Consequently, they are unable to produce an unbiased image, thus even when manipulated, my final images are still capable of triggering the memory of the viewers. However, because historical and political context is heterogeneous in space and time, each memory response is a function of where the viewer is from and what event is being portrayed. This work thus allows me to question how political and social differences in a globalized world shape our individual memory response.

My analysis is mediated by an understanding that the future does not evolve in isolation but rather is a function of what has happened in the past. This begs the question of what is progress? Is it creating distance between the past and the present or is it a future that encompasses the greatest amount of information from the past? In these works, I continue to discover the complexity of moments that can be instantaneously swift, slow, fast, loud, quiet, visible, invisible, stable to unstable, and explore the possibility of an image-making process that can contain this complexity.